Happy New Year! I hope this new year brings you much joy, peace and prosperity.

Since it's Tuesday, I figured I'd give you a quick update on some of my knitting projects.

A couple of weeks ago I told you about my afghan project that was going to use up the scraps of yarn I had accumulated. Well, I knitted like a madwoman before Christmas and finished it! I only have a little of the burgundy left so it's mission accomplished. It's not full size, but it's enough to throw over my shoulders or cover my lower half when watching TV. 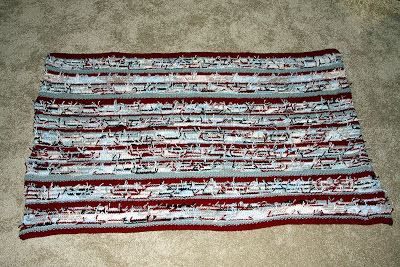 I've also been working on my sky scarf. It's about 60% done. I still have 4 more months of sky watching and knitting to do before I can call this one complete. I'm definitely going to be using the additional white yarn I purchased and possibly a little of the darker blue. Since I'm using more yarn than the "pattern" called for, I'm wondering now if I made the scarf too wide. The instructions didn't specify the number of stitches, so I went by the photo they supplied. It looked to me like it was around 50 stitches. Also, it's a little stiff and probably won't drape that well. Oh, well, I'm not going to start again.

So far, the yarn has totalled $100 (plus tax), but I'll probably have some leftover, especially the greys and light blue. I'm not sure it's going to be enough to make anything, though. Anyway, I think that's a tad expensive for a scarf. I was hoping to make another one next year, but I'm rethinking that idea.  In the photo below, May 1, 2012 is at the top, December 31, 2012 is at the bottom. 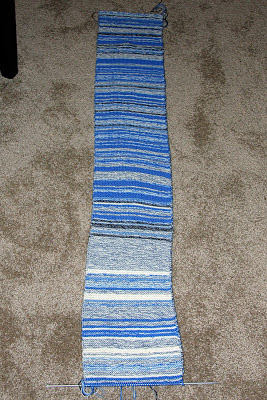 I also started another ruffled scarf. I had to start this one three times. At first, the fine strands of yarn were catching on my dry hands. It was really annoying. So I decided to leave it until after a few applications of hand lotion. My next attempt was going ok until I put it down to get a cup of tea. When I picked up again all of the stitches slipped off the needle, fell to the floor and came complete apart. There was no salvaging it. I may have said a few choice words that I won't repeat here. Anyway, this time it's going much better. I'm being much more careful about how I put it down and pick it up each time. I'm keeping my fingers crossed that I don't lose the stitches again. 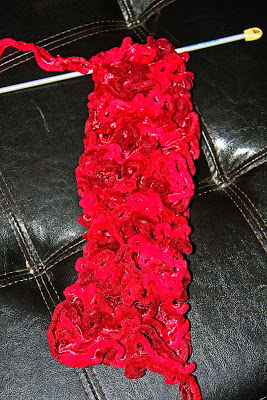 I haven't made any plans yet as to this year's projects.  I had a few in mind, but haven't done anything to make them happen.  I'll have to give it more thought and get off my butt.

That's it. Have a great day!

Needlework Tuesday is hosted by Heather over at Books and Quilts.
Posted by Marie at 12:02 PM