Last week, I finished another another ruffle-y scarf in Bernat's Truffle yarn.  I just love the colour. 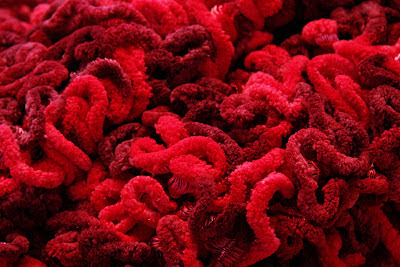 I also purchased some more Bernat's Ribbons yarn on sale. I love this yarn and wanted to get one or two more skeins, but when I was the sale (30% off), I got carried away. I bought enough to keep me knitting for awhile. I'm not sure what I'm going to do with all of these scarves. I'd only wear them in the winter and, of course, only one at a time. I might try to figure out what else I can make with this novelty yarn. 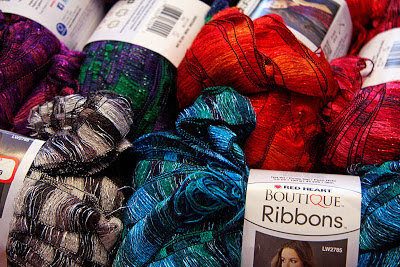 I also stumbled upon my next project. I won't be starting this one for awhile, but I'm so excited about it I have to tell someone. A few months ago, when I was knitting my sky scarf, I was thinking that it would be nice to somehow represent more of what was happening around me. The sky scarf I've been knitting captures the sky, but I was thinking more along the lines of precipitation, temperature or even ground cover. I had lots of other things to do, so I didn't really do anything more than think about it. Well, yesterday I found this Temperature Scarf KAL (Knit-a-long) and CAL (Crochet-a-long) by Bernat. Exactly, what I was wanting to make. This is even better because they mostly figured out the basics for me.

Anyway, I'm definitely going to have to make some changes, like the scale of the recorded temperatures. Our winter temperatures are much colder temperatures than -6C (22F). For example, the past two days have been colder than -40C (-40F) with the wind chill. Brrr.... Also, as much as I love seed stitch, I don't think I'd like a whole scarf done in it.   The problem, as I see it, is that it doesn't give you nice crisp lines.  Decisions, decisions.

I'm going to give myself lots of time to start this one. I probably won't be joining the official KAL because I'm thinking of starting closer to April, when my sky scarf is wrapping up. I might start before that if I make some decisions regarding the yarn I'll be using. I'll keep you posted on this one.

Thanks to Heather at Books and Quilts for pointing this project out to me. Even though I had seen it already and was busy planning away, it's nice to know that my blogging friends sometimes think of me.  ;)

Also on my agenda this winter: move my craft room/stuff to the basement and weed out some old craft supplies that I won't be using anymore. I've already moved all my stuff to the basement, but haven't set anything up or organized anything yet. It makes it really hard to do or find anything so I probably should be making that a priority. I bought some baskets the other day for organizing. That should help, once I start, that is. 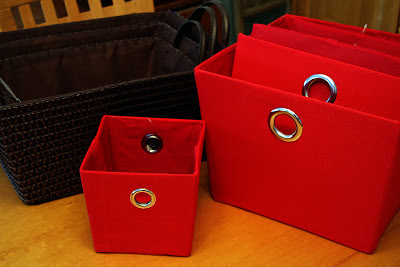 The red ones are foldable.  The other baskets are folded up and stored inside the big one for now.

I also had some other crafting projects sort of planned for this year, but as of right now, none of them have gone beyond the "thinking-of" stage.   Time is just zipping by.

Needlework Tuesday is hosted by Heather over at Books and Quilts. Be sure to visit her to see what she's up to.
Posted by Marie at 10:36 AM