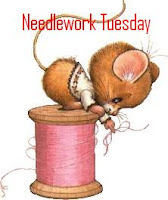 Needlework Tuesday is a post where I share my needlework and other crafting projects.  Here's a quick update on a few of the things I've been working on.

I've completed 5 weeks of my "year-long" Zentangle project.  Every day, I create a 3.5"x3.5"  tile using one tangle pattern.  With this tile, I'm basically learning the pattern.  Sometimes I'll try out a few variations; other times I'll complete the whole tile with the basic pattern or a variation I like.  Then at the end of the week (usually Saturday) I combine all of the patterns onto one tile.   Here are my end-of-week Zentangle inspired drawings: 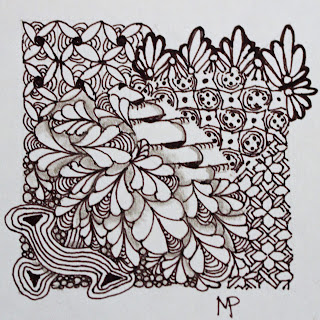 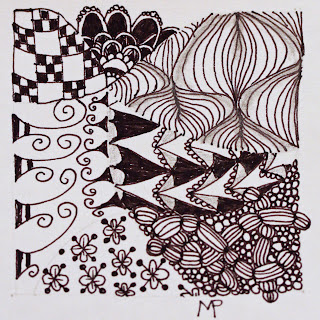 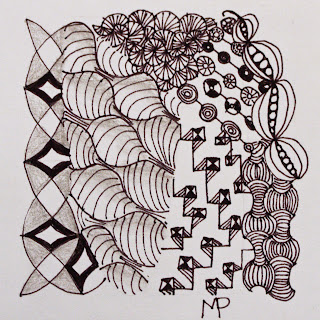 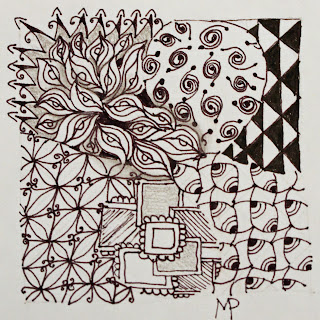 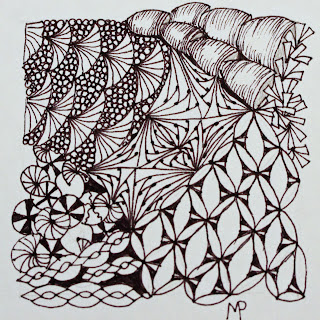 Week 5: Triadz, Betweed, Pegs, Merryweather, Solow, Blink, Cack
I've included the names of the patterns used below each tile.  I tend to waffle a bit on the whole pattern naming idea, but it sure makes it easier if I find one I like and want to look up how it's done.  Anyway, I've included them for reference.
I haven't included photos of the daily tiles because I really didn't want to post all of those photos.  Some of them are really nice, but many of them are unremarkable.   So far, the project has been going ok, but I'm sort of losing steam.   I'm finding that I have less time do to this each day.  Also,  I'm not thrilled with some of the stuff about Zentangles that I've seen online.  I just might just cut this project short.
One note about the above photos:  I shouldn't have used my macro lens to shoot these.  It really highlights all of my shaky lines, which is the opposite of what I'd like.  :(
The other thing I've been sort of working on is my temperature scarf.   It's up-to-date as of October 4.  I just recently started using the lighter yellow (which represents temperatures between 7C - 14C).   I'm sure it's just a matter of time before the greens (dark for 0C - 6C, light -1C - -7C) creep in.  As you can see, I still have tons of ends to weave in. 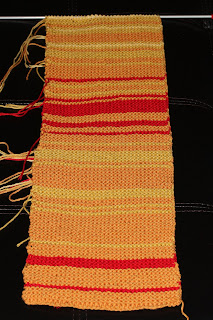 The last thing I was working on was my long wrap. If you remember from a month ago, it was skewing to the right. I tried a pattern adjustment suggested by Heather and her sister, but it didn't quite work fix the problem. I'm definitely going to scrap the thing and make something else. Just not right away.

I'll hope to be looking into some Christmas crafts soon, but it might be a bit early for me.

That's it for this week.
Needlework Tuesday is hosted by Heather over at Books and Quilts.
Posted by Marie at 2:39 PM